We’re all consumers of semiconductors, whether we’re aware of it or not. They broadly include the advanced computer chips that power the most popular everyday electronics, from smartphones to electric vehicles to smart refrigerators — and especially the data centers that host most of our experiences on the internet.

The chip sector is growing rapidly, and it could surpass $1.5 trillion in annual value as soon as 2030, so investors might do well to buy some long-term exposure for their portfolios.

Nvidia (NASDAQ: NVDA) stock is one way to do that. The company is a global leader in the semiconductor industry, and it’s also a pioneer of artificial intelligence (AI) technologies. Its share price hit a 52-week low of $126.17 in September, and one Wall Street investment firm thinks it could soar to $310 within the next 12 to 18 months. It has already recovered modestly to $135.16 as of this writing, but that still leaves plenty of room to the upside for investors who buy today.

Nvidia is building for the future of technology

Nvidia will always be a semiconductor company — that’s its bread and butter. It produces some of the most advanced graphics processors on the planet in a range of categories, most notably for gaming purposes and the data center.

The company is experiencing an abrupt slowdown on the gaming side this year as people have tightened their belts amid soaring inflation and rising interest rates. In fact, in the recent second quarter of fiscal 2023 (ended July 31), it reported a 33% drop in gaming revenue compared to the same period last year. This segment will bounce back eventually, though it could take a couple of years for the economic environment to shift back in consumers’ favor.

But because it’s a diverse organization, there is a silver lining for Nvidia. Its data center business, which is now its largest, grew by a whopping 61% in the same quarter and generated $3.81 billion in revenue — but more on that later.

There’s potential for an equally exciting opportunity to unfold in Nvidia’s automotive segment, where its Drive platform has been adopted by 35 of the largest car manufacturers. Drive is an end-to-end autonomous self-driving platform, including all the hardware and software a car company needs to deliver that capability in its vehicles. So far, Nvidia has built up an $11 billion sales pipeline, but the opportunity could exceed $2.1 trillion by 2030, so it has only scratched the surface.

Nvidia’s revenue might take a (temporary) breather this year

The gaming segment is set to be a drag on Nvidia’s total revenue for the remainder of fiscal 2023, to the degree that analysts expect the company will only eke out marginal overall growth compared to fiscal 2022.

But things are expected to improve from fiscal 2024. It’s worth pausing to reflect on the incredible run of sales growth Nvidia has had over the last few years, because such context might help investors view the fiscal 2023 slowdown as the blip it’s likely to be in the long run. 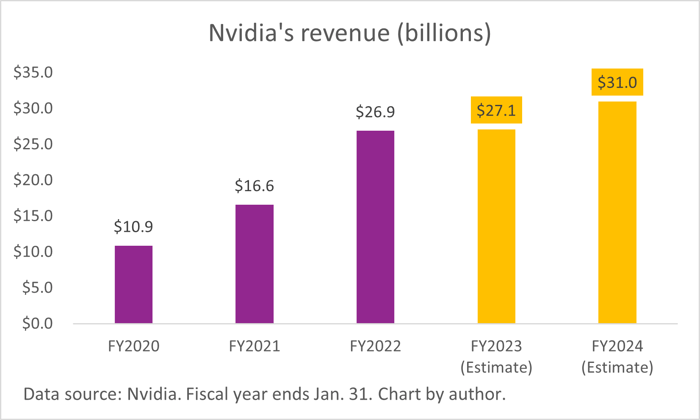 Wall Street is on board with Nvidia stock

Circling back to the data center, its positive contributions to Nvidia’s business are clear already. But there’s a technological tidal wave building right now, underpinned by artificial intelligence, which is going to crash into the corporate world over the next decade (and beyond). According to a report by McKinsey & Company, AI is set to add $13 trillion to the global economy by 2030 as up to 70% of businesses adopt it to supercharge their operations.

Nvidia is a key proponent of that trend. Its chips have transformed the data center from a place to store information into a utopia for training AI and machine learning algorithms. The data stored inside this infrastructure is valuable if it can be analyzed effectively and at scale. That’s what Nvidia helps to accomplish.

Therefore, it’s no surprise that one Wall Street investment firm — Tigress Financial — has attached a $310 price target to Nvidia stock. It represents 129% upside from where it trades today and, if it gets there, would mark a 145% gain from its 52-week low set earlier this month.

While Tigress holds the Street-high target on Nvidia stock, the firm is certainly not alone in its bullish sentiment. The Wall Street Journal tracks 43 analysts covering Nvidia, and only one recommends selling. The group is overwhelmingly positive, with 27 giving it the highest-possible buy rating, four recommending to be overweight (bullish), and 11 staying neutral.

This might be a chance for investors to take advantage of the pessimism plaguing the broader tech sector by building a position in Nvidia stock right now.

Missed Out on Nvidia? My Best Chip Stock to Buy and Hold