The global artificial intelligence (AI) market is poised to grow into a $1.4 trillion opportunity by 2029, up from around $387 billion now. That’s an eye-popping number, so how can investors tap into AI’s huge potential?

There could be an easy way. Look no further than how Nvidia (NASDAQ: NVDA), The Trade Desk (NASDAQ: TTD), and Amazon (NASDAQ: AMZN) are using AI to propel their businesses and you’ll see why these stocks look like good long-term AI bets. 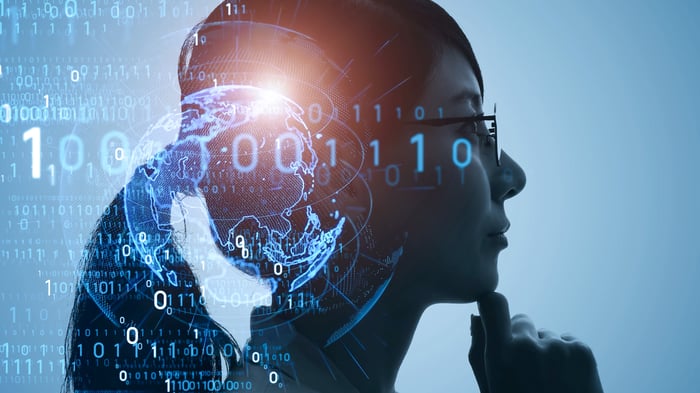 Nvidia has long been a leader in the semiconductor market with its graphics chips, but large tech companies also tap into Nvidia’s chip know-how for their AI systems. Nvidia’s graphics cards are good at processing lots of complex data within AI and the company continues to move further into the space. Earlier this year the company introduced a new lineup of AI-specific chips for data centers.

That’s important for Nvidia and its investors because in the most recent quarter, which ended on July 31, Nvidia data center sales spiked 61% to $3.8 billion. The new chips will help the company tap further into the AI chip market, which will be worth an estimated $195 billion in 2030, notching a compound annual growth rate of 37%.

And chips for data centers aren’t the only market Nvidia will benefit from. The company also develops AI systems for semi-autonomous vehicles. As cars get smarter and rely more on chips that make complex driving decisions, Nvidia believes it will have a total addressable market of $300 billion in the auto market.

Nvidia’s stock isn’t exactly cheap right now, with the company’s trailing-12-month price-to-earnings ratio at 40, compared to the semiconductor industry’s average of about 16. But investors should consider that the company’s stock looks much more enticing at this current valuation than its P/E of 92 a little more than a year ago.

With the company’s stock cheaper than in the recent past and Nvidia still in the early stages of tapping into the massive AI market, investors may want to consider snatching up some shares of the company right now.

The Trade Desk is an advertising platform for companies looking to place their ads across the internet, mobile apps, and connected television platforms.

An ad platform may seem like an odd suggestion on this list of AI stocks, but The Trade Desk deserves a spot here because it uses artificial intelligence and algorithms to help advertisers automate the process of finding and buying ad spots across the internet.

The Trade Desk’s massive opportunity is just coming into view as the company taps into the fast-growing digital ad market that will be worth an estimated $315 billion in 2025 — up from $240 billion this year.

The company is already putting up impressive numbers, too. Sales increased 35% in the second quarter to $377 million and came at a time when some of its advertising peers were experiencing a sales slowdown.

The Trade Desk’s stock trades at about 21 times sales, which is higher than the software industry’s average of about 9. But with the company’s current P/S much lower than the 43 it was about a year ago and its $1.2 billion in cash on hand, the company is in solid financial shape.

3. Amazon has lots of angles

Amazon is best known for its e-commerce website, but some investors may not know how AI goes into that site — and lots of other Amazon businesses.

The company uses complex machine learning to give shoppers product and deal recommendations on its site, uses algorithms and AI for the just-walk-out technology in its Amazon Go stores, and offers AI services to developers through its Amazon Web Services (AWS).

The good news for investors is that Amazon’s integration of AI into many of its businesses has helped the company grow into a leader in both e-commerce and cloud computing.

And the company’s recent performance proves that Amazon is continuing to grow at a healthy clip, with total sales up 7% in the second quarter to $121 billion. Amazon’s management also issued strong third-quarter revenue guidance of between $125 billion and $130 billion, representing 15% year-over-year growth at the midpoint.

Amazon’s P/S ratio of 2.4 may make the stock look expensive to some investors, but it’s important to note that the average P/S ratio for the internet and direct marketing sector is 4.1.

Keep this in mind when buying these stocks

There’s a lot of pessimism in the market right now as investors digest a lot of information about high inflation and the Federal Reserve’s aggressive rate hikes to bring it down.

Share price declines have caused some investors to sit on the sidelines, but history shows that this is likely a mistake. Buying great companies and holding onto them for five years or more is still one of the best ways to build wealth.

Investors may experience more share price volatility in the short term, but once the market bounces back — and history shows that it always does — investors likely will be glad they picked up Amazon, The Trade Desk, and Nvidia while the market was down.