Nvidia (NASDAQ: NVDA) emerged as one of the more notable semiconductor growth stories over the last few years. Once just a gaming chip company, it has successfully repurposed its technology to the latest technological advancements, including artificial intelligence and the metaverse.

That success helped the stock price rise by over 2,500% since the beginning of 2015. Investors will struggle to replicate such huge returns, but semiconductor stock investors who missed out could perhaps see similar outsized gains by buying stock in one of Nvidia’s main rivals, Advanced Micro Devices (NASDAQ: AMD).

Admittedly, AMD may seem like a strange choice here since it has slightly exceeded Nvidia’s returns since the beginning of 2015, rising by 2,700%.

Nonetheless, at that time, AMD had become a penny stock, and many investors questioned its future for good reason. But AMD also began to manifest a turnaround under the leadership of CEO Lisa Su as the company made CPUs and GPUs its exclusive focus.

Chip development cycles take three to five years, so it took some time for AMD to gain traction. Still, the pace of adoption accelerated. In the first quarter of 2022, AMD claimed 24% of the GPU market, up from 20% in the year-ago quarter, according to Jon Peddie Research.

Likewise, it showed tremendous strength in CPUs after lagging longtime rival Intel for decades. In late September, AMD will release its 5-nanometer chip, the Ryzen 7000. Intel remains focused on its 10nm chip. Additionally, it continues to gain traction in the data center market. According to Omdia, AMD now claims 23% of that market, up from 16% one year ago.

How it fared financially

Not surprisingly, these successes boosted the top and bottom lines considerably. In the first half of the year, AMD reported $12.4 billion in revenue, 70% more than in the same period in 2021. Over the same time frame, non-GAAP (adjusted) net income came in at $3.3 billion, rising 130%. AMD slightly reduced its tax burden and held the line on cost of sales and operating expense growth to generate a higher non-GAAP profit.

Admittedly, the company expects some modest slowing as it forecasts revenue growth of 60% for 2022. Also, the acquisitions of Xilinx and Pensando slowed free cash flow growth. At just over $1.8 billion for the first half of the year, it rose by only 6%.

That, along with a generalized sell-off in tech stocks, may have weighed on AMD stock. It lost more than one-fourth of its value over the last 12 months, but it did not fall as far as Nvidia. Despite that drop, AMD still maintains a lower valuation than Nvidia. It trades at a 32 P/E ratio compared with Nvidia, which sells for 44 times earnings. While AMD stock isn’t cheap, it trades at a substantially lower valuation than its rival. 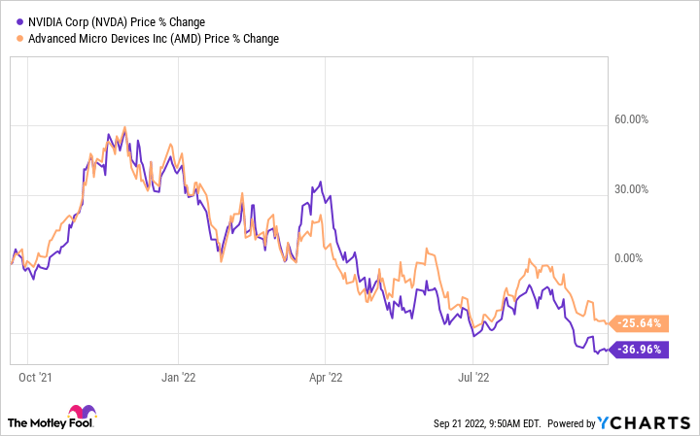 AMD — a path to a second chance

Investors who missed out on Nvidia should consider AMD instead. Not only is AMD making market share gains on Nvidia, but it also posed a strong challenge to its struggling archrival Intel in the data center. Given the 60% revenue growth expected for 2022 and its rising non-GAAP profit, it is likely AMD is a buy at current levels.

10 stocks we like better than Advanced Micro Devices
When our award-winning analyst team has a stock tip, it can pay to listen. After all, the newsletter they have run for over a decade, Motley Fool Stock Advisor, has tripled the market.*

They just revealed what they believe are the ten best stocks for investors to buy right now… and Advanced Micro Devices wasn’t one of them! That’s right — they think these 10 stocks are even better buys.

1 Growth Stock Set to Soar 145% From Its 52-Week Low, According to Wall Street