E-commerce company Shopify (NYSE: SHOP) was a big winner during COVID-19, but the stock has fallen from grace, down a whopping 80% from its peak. Wall Street can be irrational in the short term, but it’s fair to ask questions in the face of such a significant decline.

Investors may uncover more questions than answers as they dig into Shopify. Here is what’s going on and why investors shouldn’t assume that Shopify is cheap just because the stock’s fallen so far.

Valuation is about perspective

Shopify remains a winning investment; shares are up more than 1,200% since the company’s 2015 IPO. However, the stock was once up 6,000% and has declined tremendously over the past 18 months. The stock seems like a bargain on the surface; if you go by the price-to-sales ratio (P/S) of 8, that is arguably its cheapest valuation ever. But it’s not always that straightforward; for example, let’s compare Shopify’s valuation to the undisputed king of U.S. e-commerce, Amazon: 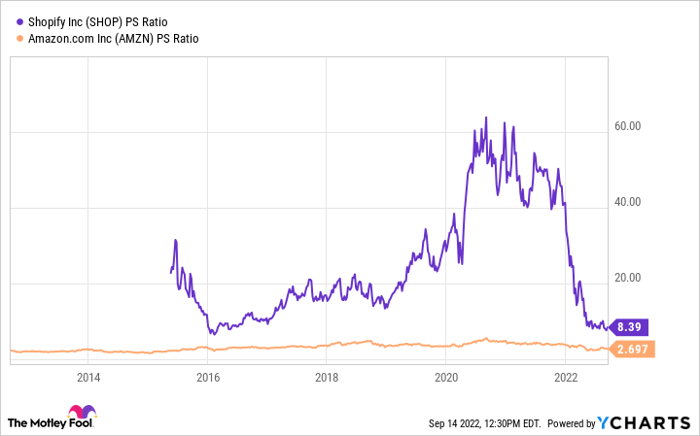 Even at its lowest valuation on record, Shopify is roughly three times as expensive as Amazon stock. So investors now face the question of whether Shopify deserves such a premium to Amazon. If not, there’s a good chance that Mr. Market may sell off Shopify further or bring Amazon’s valuation up — or both. A company’s fundamentals tend to dictate where prices move over the long run.

Should Shopify command a premium over Amazon?

Let’s compare some critical fundamentals between the two companies; Shopify is a much smaller company than Amazon and is growing faster. You can see that Shopify’s revenue growth was consistently over 30% a few years ago, and it spiked further during the pandemic. Meanwhile, Amazon’s been a bit slower and steadier. One might easily argue for Shopify’s premium valuation if going by revenue growth alone. 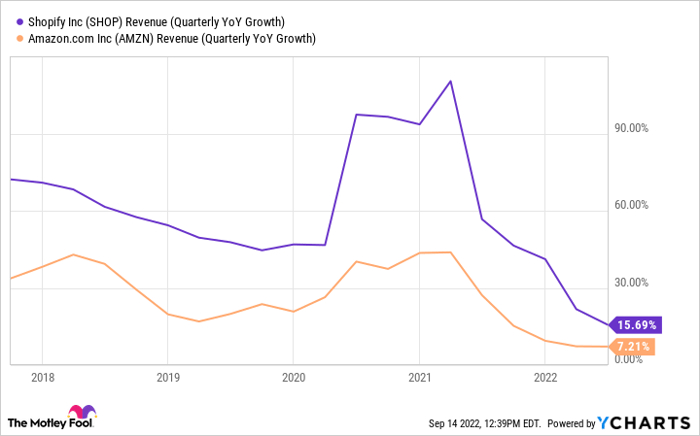 But a closer look does reveal some issues. For one, Shopify’s growth has notably decelerated over time. Its most recent quarter, when it put up 15% growth, is a far cry from several years ago. Yes, Amazon’s growth has slowed, too, between 2021 and 2022, but the gap in growth rates between the two companies is arguably smaller than ever.

Then you get into the financials of each company. Amazon is a more profitable company than Shopify at the moment. Both companies have seen their free cash flow dry up over the past year due to surging freight costs, wages, and other operating expenses. However, Amazon is turning 7% of its sales into operating profits versus 2% for Shopify. Meanwhile, Amazon is still profitable on the bottom line with $11.6 billion in net income over the past year, while Shopify remains in the red. 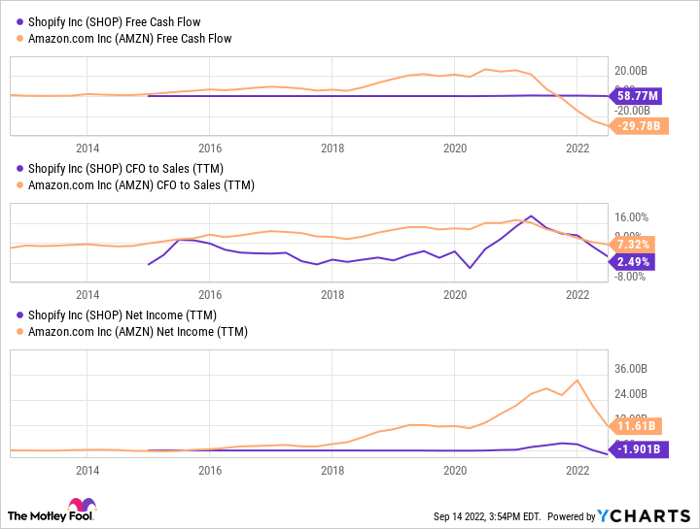 Perhaps most important over the long term is Shopify’s ongoing investments to flesh out its logistics segment to better compete with Amazon. Meanwhile, Amazon’s cash cow, Amazon Web Services (AWS), continues growing and should put more cash into the company’s coffers over time.

Amazon might be the better stock to buy today

This isn’t to say that Shopify’s in the wrong spot, but the argument that the stock deserves a much higher multiple than Amazon is shaky, in my opinion. Shopify doesn’t have an AWS-like business generating tons of cash flow, and its increased investments could hold back Shopify’s financials for a while, even if these investments are necessary for its long-term competitive positioning.

Sometimes a stock goes into the too-hard pile, and that’s where I see Shopify right now. By itself, Shopify still offers a lot to like for long-term investors, but Amazon might be the stock that will give investors the most short-term upside because of AWS and how much cheaper shares are today.

Our award-winning analyst team has spent more than a decade beating the market. After all, the newsletter they have run for over a decade, Motley Fool Stock Advisor, has tripled the market.*

They just revealed their ten top stock picks for investors to buy right now. Shopify is on the list — but there are nine others you may be overlooking.