Apple (NASDAQ: AAPL) is in a near duopoly with Samsung in one of the world’s most addictive products: smartphones. Combined, the two account for over half the global smartphone market. In the U.S., however, the iPhone commands about 50% of the market.

Warren Buffett, one of Apple’s largest shareholders and most prominent cheerleaders, believes Apple is the best business he knows in the world. Throughout the iPhone’s upgrade cycles, Apple has consistently improved its design and functionality to meet ever-changing consumer tastes. Perhaps most importantly, the iPhone’s camera gets better with every new version. iPhone users can quickly snap the highest-quality selfies and videos of their kid’s soccer games and post them to social media in a heartbeat.

Referring to lines of iPhone loyalists who wait outside Apple stores in advance of its new releases, Buffett’s right-hand man Charlie Munger quipped: “I’ve got zillions of friends who’d almost part with their right arm before they’d part with their iPhone. That’s a hugely powerful position to be in.”

But it’s more than just the iPhone that’s keeping people entrenched in the Apple ecosystem.

Why Apple’s iPhone is a “sticky” product

Buffett has referred to the iPhone as a “sticky” product, meaning customers repeatedly return to Apple’s smartphones. Aside from the iPhone’s design appeal, users like the brand because of its add-on services. iPhone users can purchase additional iCloud storage, download music from the Apple Music app, and conduct touchless payments with Apple Pay. And if iPhone users wanted to switch to a competitor, they might have to abandon precious data stored in their iCloud or reenter their cards on a new payment platform. The tiny fees customers gladly shell out for these widely used services may seem like small potatoes for the behemoth company, which has a market cap approaching $2.5 trillion, but the financial impact may surprise you. Because these services are digital, there is minimal additional cost when an iPhone customers add a service. That means every new dollar in revenue Apple receives from its service is more profitable than the last.

Apple’s services business has plenty of room to keep growing. For example, only about 75% of iPhone customers have activated Apple Pay, and many haven’t begun to use it. Yet Apple Pay has already overtaken Mastercard in transaction volume over the last 12 months. As users continue to adopt Apple Pay and download new music, Apple’s services segment can become a larger part of the overall business, which has grown from about 20% of overall gross margin in 2017 to over 31% last year.

Where will Apple be in five years?

Apple has a huge advantage over many companies in that its increasingly profitable service segment is also its fastest growing. After you factor in that the segment also makes iPhone users more loyal to the company, you can see why Buffett loves the company. 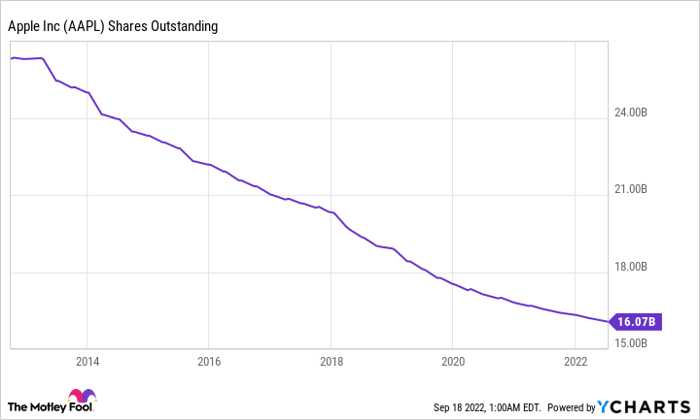 Another reason Buffett likes Apple is its share repurchases. The company has religiously retired shares over the last 10 years, which increases the percentage of the company existing shareholders own. Similarly, repurchasing shares en masse also increases its earnings per share, all else being equal.

When you combine Apple’s business advantages over other companies with its ability to retire shares at a prodigious clip, you have a stock that has a high probability of outperforming the market over the next five years. Investors are wise to follow Buffett’s lead, considering he bought more shares in the first and second quarters of this year as the stock retreated from its 2021 highs.

10 stocks we like better than Apple
When our award-winning analyst team has a stock tip, it can pay to listen. After all, the newsletter they have run for over a decade, Motley Fool Stock Advisor, has tripled the market.*

They just revealed what they believe are the ten best stocks for investors to buy right now… and Apple wasn’t one of them! That’s right — they think these 10 stocks are even better buys.